With the Chelsea Flower Show taking place each year up the road from Auriens, it made sense to commission a multi-gold medal winner to design our garden spaces. Based in London and Brighton, Andy Sturgeon has been awarded the coveted “Best in Show” award three times, most recently in 2019, and has twice been voted among the top ten garden designers in the UK.

Andy can turn his talent to anything from designing lush roof terraces in central London to landscaping large country-house estates. For Auriens, he’s designed the main residents’ garden as well as three private apartment gardens using his signature approach of creating architectural yet timeless spaces and celebrating a sense of space.

Biophilia has always been something of a driving force for me but now, more than ever, we know how important it is to see greenery every single day for our mental and physical wellbeing.

Right from the moment the first plans were drawn, the main garden at Auriens Chelsea was always going to be a central focus. A sanctuary from the buzz of King’s Road, each aspect has been designed to maximise exposure and accessibility, dissolving the boundaries between the inside and outside.

“I was keen to make sure the main garden responds to the location with the materials and planting used but also forms a strong visual connection to nature and the passing of the seasons,” explains Andy. “Biophilia has always been something of a driving force for me but now, more than ever, we know how important it is to see greenery every single day for our mental and physical wellbeing.”

To that end, he’s been careful to ensure that the planting provides nectar to attract invertebrates and insects throughout the year. “It all but guarantees that birds and wildlife will follow,” adds Andy. 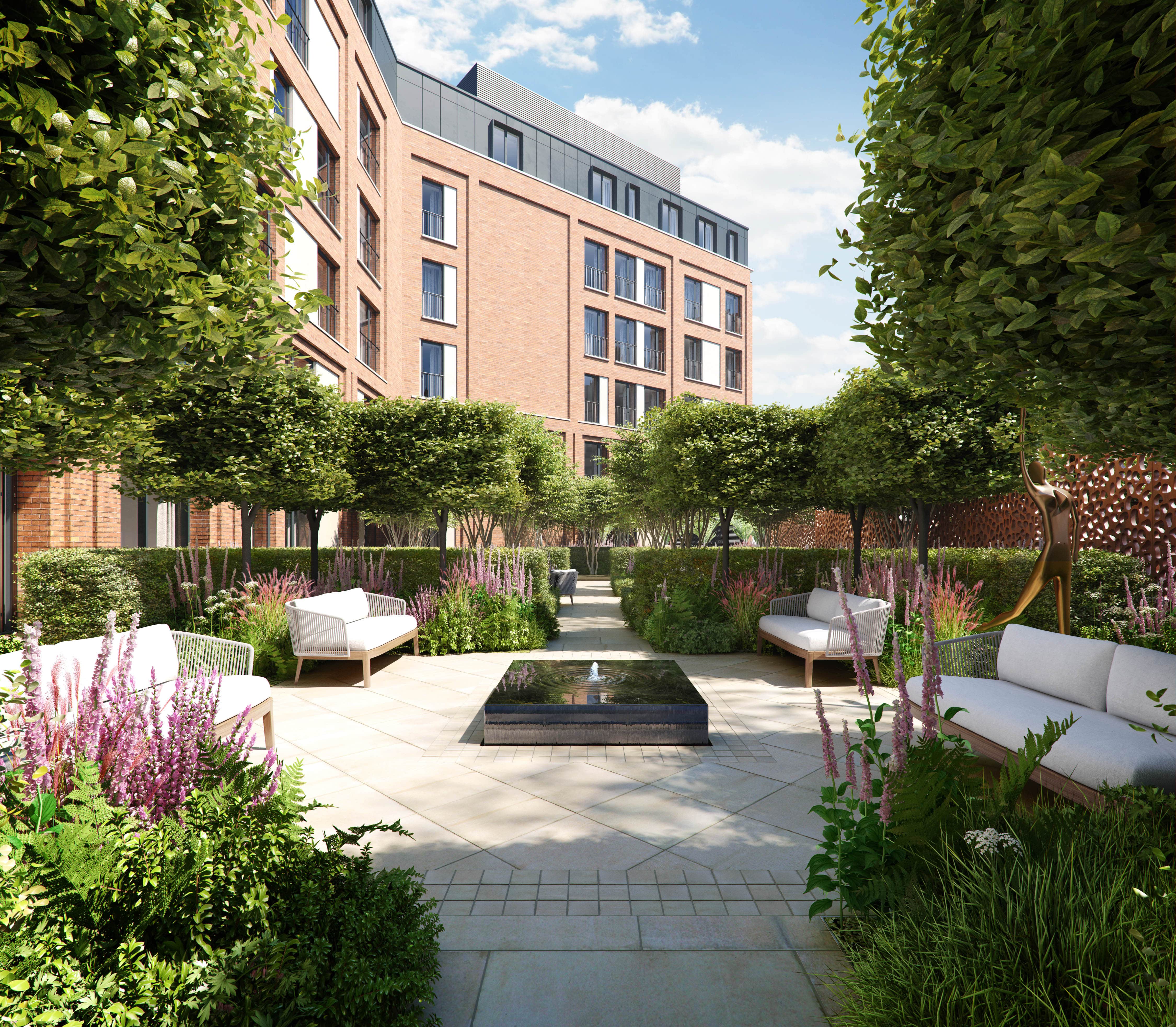 The space has been conceived to be enjoyed in different ways and at various times of the day with a fire pit to warm up cooler evenings and a soothing water feature for quieter moments. “There’s the danger of a garden only ever being enjoyed during the summer months but here, because of the protected position, we’ve envisaged that residents will be able to walk, relax and dine in the surroundings throughout the year.”

Taking inspiration from a formal country-house garden, the space is divided into a series of different “rooms”, each with its own character and atmosphere. These are linked by paved areas in pale biscuit-coloured Yorkstone. Architectural hedging in yew and beech is used to add definition and structure but kept low enough to allow longer views. Evergreens are embellished with textured foliage, grasses, and evocative scented plants such as star jasmine and sweet box.

Positioned throughout are comfortable pieces of British-made garden furniture designed by Gaze Burvill allowing for anyone to pause or sit quietly, as well as larger spaces for small groups of friends to gather together or watch over the grandchildren playing.

In keeping with the sophisticated but vibrant theme, and as a taster of what’s to come, Andy has also created our beautiful new show apartment garden, ready to view on-site from early November.

“What I love about designing gardens is that it’s like putting together a puzzle, fitting together different ideas to make it work,” says Andy. Here, the focus was on ensuring the Auriens garden would be a space that is serene and beautiful but would also energise and invigorate.”

Bringing the Auriens vision to life, we are delighted to announce that appointments are now available to view the first show apartment on-site at Auriens Chelsea. Exquisitely furnished by London design studio Albion Nord, here’s a flavour of what to expect.

Read More
Articles
Down To The Details

As we enter the final fit-out stage of the Dovehouse Street build, we reveal some of the innovations developed by the team as well as the attention to detail that sets Auriens Chelsea apart.

A veteran of the hospitality industry, Rupert swapped the sunny beaches of the Caribbean for the elegant streets of Chelsea to lead the opening team of Auriens Chelsea.