Charles Eugster, 97
The Athlete
18 April 2017
Introduction
Auriens, in association with the Financial Times, are profiling individuals who redefine later life. This week we profile Charles Eugster, the 97 year old athlete. Since his life affirming story we are sad to learn of the loss of Charles and pass condolences to his family

At the age of 90, the former dentist rebuilt his body. Now, he is a world-class sprinter and long jumper, and wants us to radically rethink how we approach later life.

Vanity is a great thing. You’re not supposed to say that, but unhappiness about the way I looked changed my life. After I retired more than two decades ago, one might have expected me to slip into the typical life of a retired professional. I had worked hard for years to build a dental practice and a newsletter business while raising a family.

Some might think that I had earned the right to take it easy. Nothing could have been further from my mind. Retirement is a slow death sentence. The inactivity that often comes with it dulls the mind and destroys the body. Yet it should be an opportunity for reinvention.

I am a case in point. As a sickly child in pre-war London, rowing, rugby and boxing became a guard against illness. But by middle age, I had become a self-satisfied lump of lard. I took up competitive rowing again at the age of 63. But after about 20 years, my performance dipped as the ageing process caused me to lose muscle mass.

Fortunately, vanity came to the rescue. I didn’t like the way I looked. Rowing may have been good for endurance but it did nothing for my physique. Every time I looked at myself in the mirror, I saw flab. What I wanted was a beach body. There was only one solution: body building. An 80-year-old has typically lost about half of his muscle mass and rebuilding that core strength requires a dedicated regime. At the age of 87, I approached a leading body builder to help me.

It is time to start a revolution that is pro-ageing

Despite some scepticism, he agreed only if I followed his advice to the letter. It worked. I soon found I was generating the change in my physique that I had desired. After two years, I wanted to test my strength and flexibility in competition and needed a different type of expert to guide me. I met my coach Sylvia Gattiker, a former national gymnast for Austria, and she developed a programme to improve my strength as well as my coordination and performance. My body was rebuilt at 90. As I saw the results of my new regime, I alighted on a new challenge: sprinting, a sport built on high intensity training. Having never raced in my life, I contacted the British Masters Athletics Federation. I overcame some initial logistical issues – there was no one else to race against in the 95-plus category – and finished the 100m in 25.76 Seconds.

I am still competing. I have set two world records for my age group and won multiple trophies and medals. Last September, I started competing in the long jump for the first time in my life and in March went to Daegu, South Korea for the World Masters Indoor Championships. 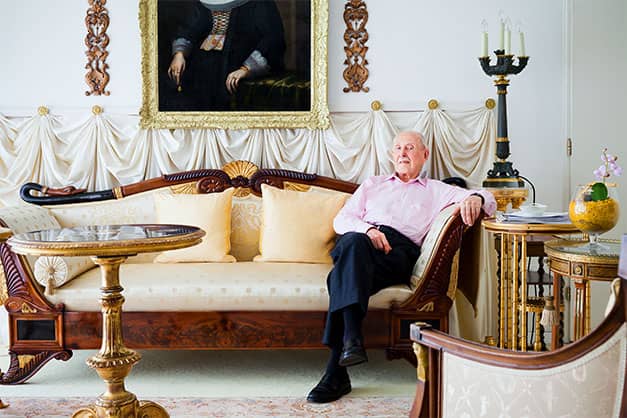 Two decades after I retired, I have transformed myself from feeling redundant, out of shape and effectively waiting to die into a fit and motivated 97-year-old. But I want to dispel any notion that I am exceptional. Anyone can rebuild their body at any age, just as I did.

To make that happen, we need to change our perceptions of ageing. Society has put an expiry date on us, and sees being old as an inexorable path to inactivity and physical decline. It doesn’t need to be that way. Indeed, as we live longer, our pension deficits grow and our health services struggle, we must change. A combination of employment, good nutrition and exercise are the foundations for a healthy life.

Since embarking on my fitness regime, I have developed a new career as a speaker and author, and even got a job with one of Germany’s biggest health club chains. Society needs to do more to engage my peer group and to not waste our talents and knowledge – and we older folk need to do more to reinvent ourselves too. The Chinese philosopher Confucius said that a man has two lives. The second life begins when he realises he only has one. So, make your one life the best. Being able to live long is a gift that we have turned into a chamber of horrors. It is time to start a revolution that isn’t anti-ageing but pro-ageing.