Joy Leslie Gibson, 90
The Scholar
16 January 2018
Introduction
Retired journalist and author of six books, Joy has completed five degrees and is putting the finishing touches to her PHD on Elizabethan literature at the Shakespeare Institute, University of Birmingham. Not content with scholarship alone, she has directed several plays for the Institute’s theatre group.

I was always interested in study. I was an only child and my mother used to read to me. I said to her, why don’t you put your finger under the line, so I can follow? I was about 3 ½. And that’s how I learned to read.

I put my longevity down to family genes. My grandfather died at 83, my father at 79 and my mother was 89. I was very triumphant that I beat her, because she was so competitive. She would have said, “Huh, you would!” It was through my mother that I was so educated. She was one of the most intelligent women I knew, but she had no education. She was very supportive and very critical, as mothers were in that generation.

I got my Lamda diploma at 18. I was furious when the war came to an end and I couldn’t go on to university. I had a place at the LSE and a deferred place at Oxford, but places had to go to ex-servicemen. I applied to be a fashion writer. I interviewed Hitchcock, Stirling Moss, Sammy David Jr. I was assistant editor on a magazine called Women’s Mirror.

I always exercised every day and I eat a lot of fruit and vegetables, not much red meat and a lot of fish. I wouldn’t say it’s brain food, but it’s low calorie. I enjoy cooking. My first book was a cookbook for M&S. They sold it throughout the world. There’s a French edition, Norwegian, Danish.
I keep my concentration going just by studying. One of the great things about being at the Institute is that I have friends who are academics and thinkers. And my boyfriend was a QC. He was much older than I was. He taught me to think like a QC. I was naturally very logical. Anyone who gets into an argument with me is on a sticky wicket! 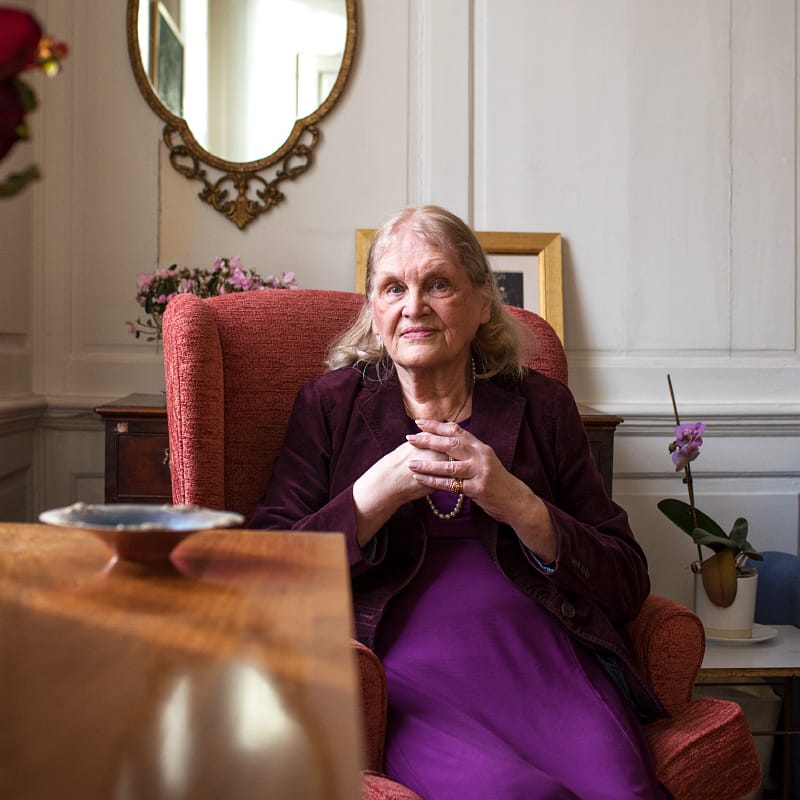 When I was sixty, I moved here to Stratford. We did a lot of play readings: The Importance of Being Ernest and Ghosts, and then I did The Changeling about four years ago. I directed Hamlet. I’ve seen Hamlet thirty-seven times. Though we did it in modern dress, I’d hardly cut the script at all, there was no music, but it was riveting. I had a remarkable cast and one or two ideas of my own. For The Changeling, I had a circle of chairs at the back and the cast were on stage the whole time. Everybody ends up dead on stage. It’s such an evil play, I felt I had to protect my cast. And I’ve been longing to do Macbeth.

What drives me is self-discipline. I get up every morning, have breakfast, get washed and dressed and do three hours work on the computer. That’s inborne in me. Not being married and not having children, I’ve got to do something with my time!

What drives me is self-discipline. That is imborne.

This thesis is on a subject no one else has really written about since 1960. I’m hoping to get it published. It [focuses on] plays of forgiveness and repentance. Forgiveness isn’t in the ancient world at all – it’s not in Plato or Aristotle. It comes from the Jewish tradition – an old saying in Leviticus, which Jesus Christ resurrected.

I have a plan as to what to do next. I have great interest in martyrdom. The mystery plays, Jesus Christ Superstar, Thomas a Becket, a play by Tennyson and then St Joan. Also, Sir Thomas More. What a nasty man!

I’m not afraid of getting older, but of course I’m apprehensive. I interviewed the ballerina Alicia Markova her for her 70th birthday, and I said to her, how did you feel when you realised you’d never be able to dance again? And she said, I’ve always found when one door closes, another opens, and you have to have the courage to do things. I’ve remembered that all my life. That’s exactly what I did by coming here and getting involved in the Institute. I’ve had a wonderful thirty years.