Arthur Taussig, 76
The Polymath
3 March 2018
Introduction
Arthur Taussig has a master’s degree in biochemistry and a doctorate in biophysics from UCLA. In the early 1960s, he went on to teach film and photography at Orange Coast College, a community college in California. When he retired in 2001, at the age of 60, his life’s work really began.

I looked up the actuarial life tables one day and it was obvious the only way to live longer was to retire early and have less stress. But it was never a case of stopping; it was a way to pursue art. I joke now that I want my full-time job back so I can slow down.

Back at UCLA I played guitar in a finger-picking style that became known as American Primitive. In 1965, someone suggested making an album. Recorded in one take under the name Harry Taussig, it was titled Fate Is Only Once. After I did it, I forgot about it and moved on. Unbeknown to me, the record became increasingly collectible over the years. One day in 2006, I took a call out of the blue from a record label that wanted to reissue it. It sold so well that the label suggested recording a follow-up. I didn’t even have a guitar any more. Music was a long way behind me. So I bought one, wrote some songs and recorded them using my laptop. The new record was called Fate Is Only Twice and was released 47 years after the original. Reinspired, I’ve recorded two more since; the more recent, released in 2016, I titled Too Late To Die Young.

My new music career had me perform for the first time at the age of 71. I made my live debut in 2013 at SXSW, a major festival meant to showcase new acts in Austin, Texas. I had a lot of fun, playing a grandfather figure, telling stories between songs. Of course I was nervous, but I thought, “If I screw up, so what?”. It’s not a big deal at my age. I have another gig in April at a guitar festival in Takoma, The Thousand Incarnations of the Rose. 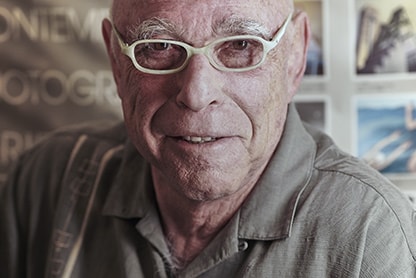 I don’t need validation any more and that makes me more productive. If it’s there, great – but it won’t stop me if it isn’t. When the Smithsonian took 7,000 of my photographs recently it was nice, don’t get me wrong, but it’s not why I work. I’m working for what comes. Inspiration is my employer, not trends in the art world. My issue with Post Modernism is that it’s looking back. I don’t believe everything that can be done has been done. You just have to look harder. That’s how I recently came up with a new approach to photography; circular images I call tondos.

I don’t need validation any more and that makes me more productive.

A few years ago I started creating illuminated manuscripts of literary classics. I decided the only way I was ever going to get round to reading works like The Divine Comedy or Hamlet was if I illustrated them. I wouldn’t have the patience otherwise. In 2016, I spent six months illustrating Joyce’s Ulysses, but then some people take that long to read it. They are all now available as ‘print on demand’ books and can be seen on my website along with my reimagined Tarot cards.

As time goes on, I become less focused on material things. I’ve pared everything back as I’ve gotten older. My meals are fast food now, by which I mean I reach into the fridge, eat an apple and some cheese and go back to work. I keep fit ballroom dancing. It’s more fun than going to the gym; the music is better and you get to dance with girls. I do choreography, too. In fact, I’ve made sketches for a ballet, an Argentine tango version of Macbeth, which I’m planning to produce.

There’s not enough lifetime to do all this stuff, but I’ve come to terms with that. I’ll see what I can get done.