Jeffrey Long, M.B.E., 87
The Fundraiser
14 April 2018
Introduction
Jeffrey works tirelessly for charitable causes. It doesn’t matter if you’re 4 or 104, Jeffrey’s efforts show that everyone can do something to help.

When I was a young man, I joined the parachute regiment. Back then we did jumps with one parachute. One day, mine didn’t open as it should have done. I hurtled to the ground rather quickly.

At that time, I was a cross-country and a boxing champion. But after the accident I couldn’t get out of bed.

I stayed in the service for a few years, but I eventually came out as medically discharged. I was fairly fit, but I sometimes would get this pain in the back.

After that I worked in the textile business. In my forties I went into full time studies for four years. Then I became the building manager on a big refurbishment program for 1200 houses. And then I came to London and worked with the British Transport Police. I even helped to get rid of my own job, by restricting the force. I retired at 62. I’ve been busy with charity ever since.

Everybody can do something. I can be in pain if I lean over. Or sometimes I’m out shopping, carrying a couple of bags, and the pain is suddenly there. I can’t explain it. Like all the weight in the world is just pressing down in one spot.

But I can walk. So I thought, I should walk! I have had the pain with a backpack. But the backpack straightens my back out too!

Jeffrey works tirelessly for charitable causes. It doesn’t matter if you’re 4 or 104, Jeffrey’s efforts show that everyone can do something to help.

About three years ago, I decided to walk the mileage to coincide with my age. So I did 84 miles: Hadrian’s Wall, the whole length in six days. The next year, I did 85 miles along the canal in the North of England. Then last year, I thought I’d have a change and go South. I decided on the Thames path.

I was on the walk and I met this girl. She said, “can I take a selfie with ya? I’ve got friends on Facebook who will support you.” 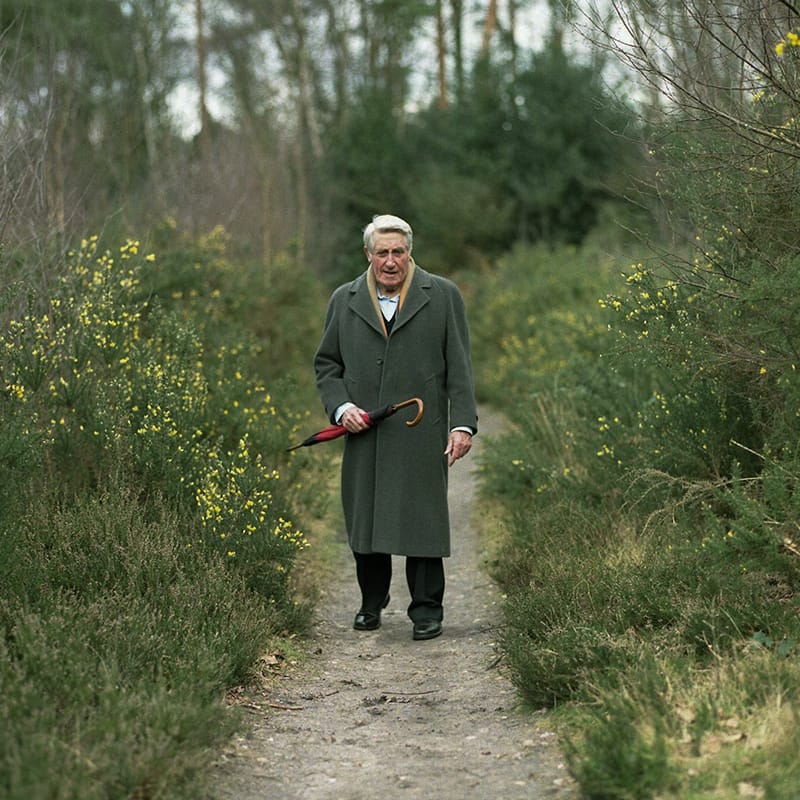 The next day, I’m walking along and I got a call from the Royal British Legion, who was one of the charities I was raising money for. They said, “you’ve exceeded your target already today. You’ve got £1,600.” Originally it was a target of £1,000 you see.

It turns out that by coincidence, Jason Manford, who I’d never heard of, saw the girl’s post. He then put it on his Facebook. He’s a big comedian. A bit later I got a call from a friend, Gary. He was looking at my JustGiving page. He said, “it’s £20,000 now.”

It didn’t hit me for a few hundred yards. And then I was nearly in tears. All this money coming in, you know?

In fact, I’m going to start a new charity. The idea is it doesn’t matter if you’re 4 or 104, there’s something you can do. And you can do it a little bit extra. Whether you’re doing 104 rolls or doing knitting, or just learning to read, you can read or knit that extra bit.

Then people can sponsor you, whether it’s for pennies or hundreds of pounds. And you put that money into any charity you want.

Helping others is like going out at night. Sometimes you just want to stay in. And then someone says, “come on, let’s go out.” And then you go out, and you’re like, “wow!” You’re on top of the world! You’re glad you did it. It’s the same with charity.

The only thing is, I find it very hard when I see an opportunity to raise some money to say no. And it’s not that people ask me. I can see the opportunities. But I’ve only got so many hours in the day. Twenty-four hours is not enough for me!