Ron Scholes, 88
The Geographer
16 June 2018
Introduction
Since retiring, the former head teacher has written and illustrated around a dozen hiking guides and trekked solo across the UK.

There’s nothing better than putting your boots on, packing a rucksack and flask and heading out the door. While the long distances I used to walk are a thing of the past, I’ll still do about eight or nine miles if there’s something I want to see and the weather’s fair.

After retirement, I trekked solo for 1,360 miles from Cape Wrath in north-west Scotland to Land’s End and it took me more than three months. Long-distance expeditions became my challenge. I never feel lonely as I’m happiest discovering things in my own time.

I’m a chartered geographer and even as a little boy, I was fascinated by landscape. Whenever I saw a castle or a mound, I’d want to find out more. When I was 14, I took myself on a cycle tour of Wales, staying at youth hostels. My parents weren’t happy at my going alone, but it was the beginning of my discovery of the outdoors. 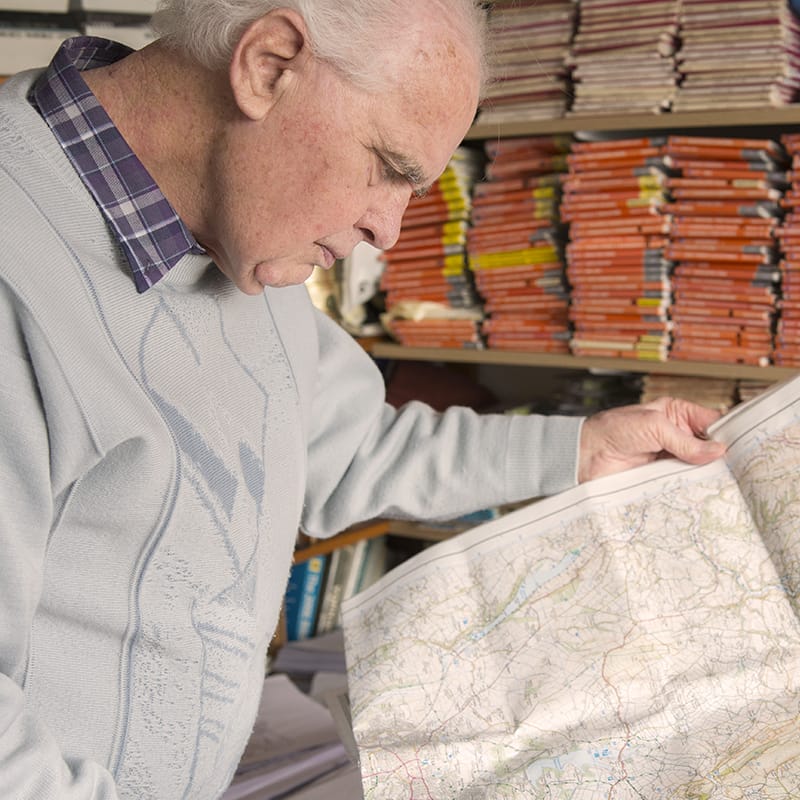 In 1945, after the war, a group were restarting the local rambling club. I went along as a schoolboy with my cap and satchel and never looked back. At the gentle age of 16 I was guiding parties from Denmark around the Peak District. My other source of creativity was my friendship with fell walker and author/illustrator Alfred Wainwright. He was a lovely gentle man – an unassuming expert. My current book is partly inspired by our conversations. I hand draw my own maps and Wainwright – or AW, as I always called him – was my inspiration.

Walking came before the writing; I just saw things and wanted to tell people about them.

From my house I can see the foothills to the Pennines and I like to get out and check details for the book. If there’s a hump or bump in the land, I want to know why. I love the Alps, the Pyrenees, the Tatra mountains. But my love of the land stems from the moors, the hills, dales and mountains of this country. There’s nothing like the British Isles for variety. When I was 74, what I’d seen of the Yorkshire Dales inspired me to write a four-part poem, now set to music and performed at concerts. On my 80th birthday I completed a long-distance jaunt from Norfolk to the Roman Wall in Northumberland – an average daily distance of 13.5 miles. For my 90th birthday I’m planning to walk from Abergavenny to St David’s in Pembrokeshire. I’m lucky. I’m six foot five and I’ve always remained slim – apart from my year of National Service, when our diet consisted mostly of fried bread and sausages. I’ve got a long pair of legs, which helps when walking, and I can still carry a heavy rucksack without difficulty. At 88 years, long-distance walking is still possible with experience and fitness. You just have to keep on doing it – and don’t bite off more than you can chew. There have been times when towards the end of the day, faced with a steady climb or more miles, I’ve been tempted to throw my rucksack over the hedge or simply flop down on the ground. But determination to continue, aided by a hummed or whistled beat has kept me going. For this I have a great reservoir of melodies – snatches of oratorios, anthems, folk tunes, hymns, light music and madrigals. All retrieved from the memory bank after years of choral singing. I’m still asked to give illustrated talks to groups such as the Women’s Institute. To keep things fresh, I’ll add new pictures and throw in a couple of anecdotes and funnies.

I never planned to be a writer; it’s always geography that’s fascinated me. Walking came before the writing; I just saw things and wanted to tell people about them. It’s been a joy to impart knowledge to others.